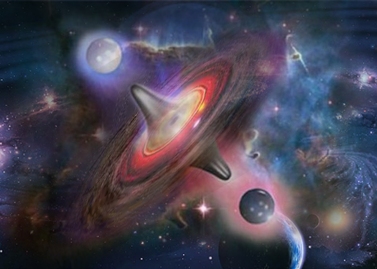 I love the TV series Fringe. For me, it was, for now, one of TV’s best all-around series. The plot goes as follows. Members of an abnormal FBI division tasked is keeping the peace between parallel universes. Their investigating methods often dangerously botched experiments that constantly threaten mankind. The TV show has firmly established a parallel universe where the characters’ duplicates exist with opposite personalities, and most episodes flip-flop back and forth between worlds without announcements. The series has been described as a hybrid of fantasy, influenced by film and television shows such as Lost..

Lost was another one of my favorite TV series. The survivors of a plane crash are forced to work together in order to survive on a seemingly deserted tropical island. It had the best ending so far as I was concerned.

There actually is quite a bit of evidence out there for a multiverse. First, it is useful to understand how our universe is believed to have come to be.
Some say it is a hypothetical self-contained reality co-existing with one’s own. A specific group of parallel universes are called a “multiverse”, although this term can also be used to describe the possible parallel universes that constitute reality. Perhaps there are other Universes, perhaps even with different versions of ourselves, different histories and alternate outcomes, than our own.
In other words, would it be possible that there’s a Universe out there where everything happened exactly as it did in this one, except you did one tiny thing differently, and hence had your life turn out incredibly different as a result?
This idea was also explored in the movie Sliding Doors.

Where you chose the job overseas instead of the one that kept you in your country?
Where you stood up to the bully instead of letting yourself be taken advantage of?
Where you kissed the one-who-got-away at the end of the night, instead of letting them go?
And where the life-or-death event that you or your loved one faced at some point in the past had a different outcome?

Is our Reality a Holographic Illusion Within our Brain?

Could this Earthly reality be a trick of the mind? Could this knowledge of the ‘virtual’, the ‘matrix’, be the truth and are all human beings is some sort of spiritual enslavement and so on, seeded thousands of years ago by the very people that the masses believe they are gaining knowledge of? Some call that a conspiracy theory, but not me. I will be adding more articles on the topic of our awakening journey.

My own awakening came about many years ago during the seventies, but it took many years before I could take it all in.

These days I’m creatively occupied working on my full-color Language of Light doodling journals when I thought back …clicking on this link from an article I wrote a few years ago…  All about vision boards I again wonder about what is “TIME”.

Knowing that Time is an illusion and that only the present is relevant, is that true? According to certain theories in physics, the time is not real and what we regard as the time is no more than changes that lead to the illusion of time, made up of human memories. OK, I can go along with that but… our memories are clearly seen through photos, articles and the people we have known but no more.

Einstein showed us that time is just the fourth dimension and that there is nothing special about ‘now’; even ‘past’ and ‘future’ are not always well defined.

My contemplation’s are that our experiences of time have to do with having parallel lives.

That might sound very unscientific but think about it.
At our physical human level, each event looks like the interaction of particles ( or waves) at a particular position and time; but time and space themselves really only manifest when there is an observer! Meaning that our perception of time’s flow depends entirely on our inability to see the world in all its detail.
Two events occurring far apart might even happen in one order when viewed by one observer, and in the opposite order when viewed by another.
Confusing?
Is ‘Time’ an artifact of our psychology?
The ‘belief’ that reality lies in a timeless realm of truth, rather than in the flow of events our perceptions show us is very powerful.
This Time topic has puzzled me for a long time ever since I read the book 12 planets speak by Carl van Vlierden that was published in 1986. His story happened in Durban and he talks about an anti-matter universe.

I loved the story, it read so easy and I want to believe that it is for real.

Messages to people of Earth.

Valdar stated: “Your Earth is a beautiful planet; it has all the ingredients one could wish for. The vast oceans, the mountain ranges, the continents. There is nothing wrong with your planet. It is those who govern the planet and seek to lead it.”

Today many of us know that to be the truth.

“We come in peace. We have tried, many times, to convince your many rulers and superiors that our methods might be better. But they have replied that they can not bring about any changes on planet Earth. It would upset the ‘balance’ of things on the planet.”

Sure…it would upset the power they have over the population at large.

“A long time ago, the Superiors of the Twelve Planets made a solemn vow which still holds today and is recorded in our historical records, that only when the Twelve Planets are absolutely convinced that Earth has adopted a better way of life will the secret be given to you.”
Valdar.

Beyond the stars, galaxies, matter and energy that we can see, we have every reason to believe that there is more “Universe” just like our own.
I will close this article with my ending statement”
People who plan for the future, live in the moment.

Today I’m totally committed to the ascension journey. Lately, my time has been spent updating the Language of Light workbook in full-color together with the meditation on the Language of Light and the accompanying seven chakra journals. What the fallen ones do is fill our “minds” with an outward bombardment of false information so that we don’t engage with our inner information that comes from our Pineal gland, the 3rd eye.
My new blog titled: lightworkerjournals ( still in process) is totally dedicated to this doodling workshops project with the seven doodling journals. In a holistic way it is my aim to enhance and advance our soul evolutionary journey, by connecting us to our higher sense of self, and who and what we are, and our soul identity, and our place and purpose in the universal order will hopefully be publish life before the year 2018 is gone.

3 thoughts on “Are we Simultaneously Living in Parallel Universes?”